When does a Scrabble game end? 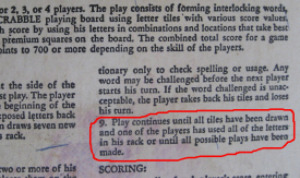 My Scrabble rules state that when player uses all tiles, game is over or when other player cannot make a word.

How to get 50 bonus points
in almost every game!
Hi Henry - Once the bag is empty (i.e. there are no more letters left), the game is over as soon as one player uses up the last of his/her letters.

Because players are allowed to pass their turn, Scrabble tournaments often introduce a rule to make sure the game doesn't drag on forever by saying something like: 'The game is over after six consecutive scores of zero' (i.e. three consecutive passes or false-words per player).

So assuming the bag was empty in your scenario, Player 1 wins.

This is how Scrabble is played in serious tournaments, and is also the rule stated on the official Hasbro site, and on the Scrabble lid from my own game, which was made back in the early 1960s (see the highlighted rule in the picture I've attached to the top of this post).

If the wording on your game is significantly different to this, can you please record the rule word-for-word as a comment to this post? I would be interested to read it.

I hope that clears things up,