There are a number of major national and international tournaments throughout the year, including an annual world championship. FISE uses a complex, Scrabble-specialized ELO system to rank its players.

Besides the classic head-to-head version of the game, Duplicate Scrabble is very popular among Spanish players, complete with its own world championship.

In addition to playing in clubs, many avid players practice online at www.redeletras.com, a website which supports the annual world championship through direct sponsorship .

The official word list for organized play is based on Diccionario Real Academia Española, an extensive, definitive, unabridged dictionary. While there is no published bound book with all the acceptable words (presumably because of its enormity), there is an online adjudicator for Spanish Scrabble words.

Even though there are fewer two- and three-letter words than exist in English, expert games tend to be much higher scoring (upwards of 500 points per game) due to the greater abundance of
bonus plays ("bingo" in English="Scrabble" in Spanish).

The tile distribution and point value for tiles is based on the Mattel version of the game, which differs from Hasbro's version

that includes the K and W. The official tile distribution for Spanish Scrabble can be found here. It looks like this... 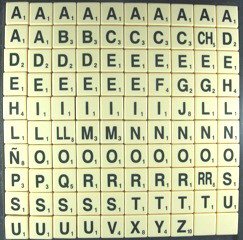 There are as yet few software resources for word study, but some word lists are posted here, where you'll also find a link to Mike Wolfberg's What word study program adapted for Spanish.

Here is where you can get a free version of DupMaster, a software program used for playing duplicate Scrabble.

While Spanish-language players still do not have deluxe boards available to them, protiles in Spanish are now available for purchase here.


Does this make you want to start learning Spanish right now? If so, here's a free taster you might like...