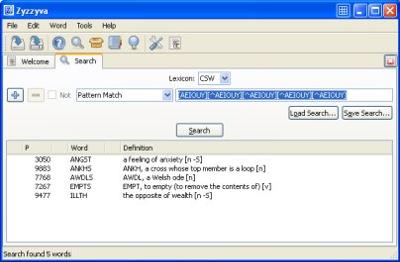 The following update comes from Zyzzyva creator, Michael Thelen. If you're not familiar with these names, you might like to read this interview I did with Michael some time ago.

Also, if you only just installed version 2.1.3, my apologies. Michael discovered a bug which has been fixed in this release. — Word Buff

I've released a new version of Zyzzyva, 2.1.4. Zyzzyva is a free program for studying words, practicing anagramming, and adjudicating challenges. It runs on Windows XP, Vista, Windows 7, NT, 2000, 98, and Me; Linux; and Mac OS X 10.3.9 or later. You can get the latest version here:

This update includes the CSW12 word list, thanks to WESPA and HarperCollins. After installing Zyzzyva 2.1.4, if you are interested in using CSW12, make sure to click the Preferences button, then the Edit button next to Load Lexicons, then activate the checkbox next to CSW12.

You will also probably want to rebuild all your lexicon databases to get updated word definitions and lexicon symbols.

Here is the full list of changes in this version:

If you're not sure what all these acronyms mean, you'll find a description of most of them on my Official Scrabble Word List page — Word Buff

One clarification about the Spanish FISE2009 lexicon, for those who play Spanish Scrabble. Zyzzyva is still unable to translate the digraphs CH, LL, and RR as single characters, so these are encoded as 1, 2, and 3 respectively. Also, Ñ is encoded as 4.

I apologize that I haven't been able to fully implement a user-friendly Spanish solution, but I also felt that continuing to leave out the FISE lexicon would be unacceptable. I hope this solution will work for now, and I will improve it in future releases.

Please give me feedback about how you think Zyzzyva could be improved! I'm always trying to make it the best word study program it can be. If you would like more information about Zyzzyva, please join the Zyzzyva Users list here:

I hope you enjoy using Zyzzyva, and most of all, have fun with it!