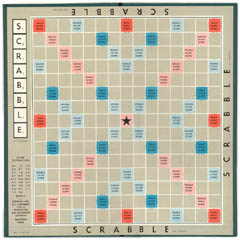 On the first play of the game my opponent used the word ITALIAN. I challenged and won. By default I became the first player to play. Do I still get double word points?

How to get 50 bonus points
in almost every game!
Hi there Ted - What an interesting question! Luckily, there's a black and white answer to it.

Although we tend to associate 'going first' with that initial 'double word' rule, the real reason behind doubling the initial word is that the word covers the central pink square, and all pink squares happen to be double word squares.

So it's irrelevant who won the start - whoever covers that central pink square gets the double word score.