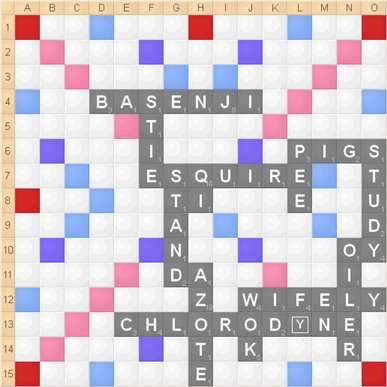 Why I Think It's A Cool Word — In 1998 a relatively new Scrabble player by the name of Nigel Richards was playing in a tournament in Christchurch, New Zealand (his home country). Faced with the letters C-D-H-L-N-R-?, Nigel could easily have played the word CHILDREN through a floating E; a bingo most players would have spotted on this board.

Instead, however, Nigel found a word that has become, in many players' eyes, the most inspired Scrabble find of all time. You guessed it ... the ten-letter word CHLORODYNE, which he weaved through two Os and an E already on the board (see the picture above).

What made this feat even more remarkable, and sent Nigel's name around the Scrabble globe, was that this word did not appear in any of the official word lists at the time, since these lists only contained words of nine letters or less.

To know this word, Nigel had to have familiarized himself with all the ten-letter words in the humungous Chambers Dictionary (the reference tome used for long words at the time)!

Return to Your Cool Words.